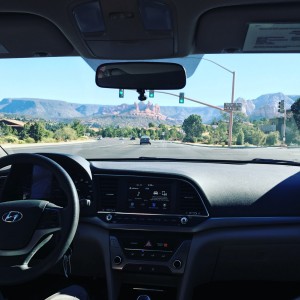 As a child, I was obsessed with learning to drive. I would spend hours driving race car video games, and could not wait for the day when I would *turn 16*. Being the youngest girl, with two much older brothers, it felt like an eternity before that fateful day when I would learn to drive. When the day finally came to pass, the car became my sanctuary, where I could choose the music I wanted, go the speed I wanted, and envision wherever it was I dreamt of going, far away from the small town life of Cincinnati, Ohio.

I never had any anxiety in a car until I was a passenger in a car that went off of a pier into the water. From that moment on, cars had lost their sanctity. It was no longer a place of refuge, but rather a trigger in an arsenal of anxiety that would be unleashed each time I entered it. I became extremely selective about who I rode with, the distance I went and whether there were bridges, water, snow, rain, or decreased visibility.

This is one way that trauma works, when our system is flooded particularly in a life threatening situation, and certain aspects of the event get coupled together. Car, Water, bridge, falling, night, rain, cold all became part of a new tapestry of terror that was newly wired into my nervous system. My reality had shattered on that day, and I began to try to weave myself back together, to re-member myself back into a cohesive being. Where I could feel safe again. Where I could drive, ride on airplanes and rest again. Where life had not betrayed me to taunt death at every corner. It became about control. How to manage my experience to limit exposure to the anxiety and the terror.

One of the turning points that I recall was hearing one of my meditation teachers talk about surrendering control as taking our hands off the steering wheel of life. That thought utterly disoriented me. How could I let go, after my life had been turned upside down by another driver? Wasn’t it necessary to take the reins and manage my life and mitigate my distress?

Over time, as I began to practice meditation and how to learn to let go, I began to experiment with this idea of taking my hands off of the steering wheel. Even if just for a moment, I would bring my attention to this clenching in my stomach, this grip that wouldn’t let go on my life. I felt like I was hanging by a thread and there wasn’t much room before I might fall into the abyss. What my teacher told me was to let go into that space. To relax into that seeming abyss where you let go into the unknown. It was like a metaphorical jumping off of a cliff.

It took a lot of suffering to get to the point where I was willing to try it, because my entire sense of self was so reliant on staying safe. Until the day that I realized that it was impossible to always predict the next moment, and that I had to accept utter defeat. The unknowns, the future, the potential for harm was just too immense to try to manage anymore.

And in that moment of defeat, I allowed myself to surrender my control. I didn’t actually have any. This was a terrifying concept to turn towards, and yet once I did it wholeheartedly, even for a split second, there was an immense amount of relief in my own body, nervous system, heart and mind. It was as if my entire orientation shifted from trying to hang on for dear life over the edge, to letting go and recognizing that the fall wasn’t what I thought it was. The mind had concocted a terrifying story about what would happen if I let go of control that mirrored the chaos and terror had I experienced that night in the car accident.

What I discovered was that in that moment of surrender, rather than some abyss of annihilation, what arose spontaneously was a vast awareness, a ground of being, and a deep sense of safety and rest. Like realizing that you will float on the water, and you won’t actually sink to the bottom. Or that perhaps driverless cars could actually work and create safer roads. We often don’t get the opportunity to throw our hands in the air in complete defeat, and see what is on the other side. But I cannot recommend it enough. In this world where success is valued above all, it is immensely humbling to recognizing that we don’t actually know what it is that is going on. This ground of being has become my bedfellow, my most intimate dear friend, which is closer than my own skin. I remind myself to turn towards it again and again, each time that I notice I have dug my heels into something, and that I am resisting some unknown future, some fear or frustration. When I see my hands are gripping the wheel, I stop, take a breath, let go and trust fall. I never thought a car falling into water, could teach me to fall into trust.

View all posts by awakeningsinreallife

Awakenings in Real Life as told by women

Welcome to Awakenings in Real Life! Conversations about the spiritual journey of women and mothers in contemporary life. This podcast is hosted by integrative psychotherapist and meditation teacher Kathryn Chaya Lubow, and actress and transformational life coach Ruby Mercado. Join us as we share insights, challenges and laughs on what its like to dive deep and wake up in the middle of our everyday lives. From driving off of a pier into the ocean to confronting the diagnosis of your child's incurable genetic disease, this podcast will be sure to open our eyes to another side of spiritual awakening that is often not shared about. We would love to hear from you! Please send us your stories of awakening or questions to share on the program at : awakeningsinreallife@gmail.com Follow us on Instagram @rubymercadol and @kathrynchayalubow www.kathrynlubow.com Music copyright ©Chaya/KK